This page provides the necessary information for requesting, managing data storage allocations, and billing.  It is essential that you review the Storage Billing FAQ and Data Storage Service pages.  Below we provide information on the three different software applications we use to help PIs (Coldfront), Finance managers (FIINE), and Lab/Data managers (Starfish) perform their roles.

To get more information about the storage tiers and their features please visit storage tiers on our data-storage services page. Please feel free to reach out to us at  rchelp@rc.fas.harvard.edu with any questions.

REQUEST OR MANAGE AN ALLOCATION

If you have an existing project in Coldfront, you can manage your allocations there:

There is a minimum setup time of (TBD – 2-3 weeks currently). This timeframe assumes we receive the completed tape setup from our service partner NESE without delay. Delays there are beyond our control and could increase lead time. Please note that any storage changes made after the 15th of the month will be reflected in the following month’s billing.

Charges for storage allocations are billed monthly. Expense code(s) can be applied to each allocation and can be sub-divided among multiple billing codes.
See our Service Center FAQ for answers to common questions.

See also How to read your Storage Service Center bill

To manage billing for an existing allocation, you will need:

Instructions for expense code management and billing record review in FIINE are available at:
https://ifx.rc.fas.harvard.edu/docs/user/fiine.html 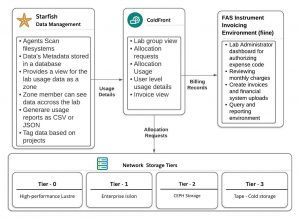 Starfish – Scans the different storage servers to provide a view, usage details, metadata, and tagging based on the projects. Check here for more details about starfish and examples to query the data.

Coldfront – Provides a view on PI projects and allocations. New allocation and updates to existing allocation can be requested using Coldfront. Check here for more details about Coldfront and its use.

Fiine – For lab/finance administrator to manage the expense codes per project/user and view invoices. Check here for more information about using the Fiine system.

Why did FASRC move to a Storage Service Center?

Since the growth of storage has increased tenfold in the past 5 years, hosting individual small capacity storage server deployments has become unsustainable to manage. These individual server systems do not easily allow for the growth of data share. Due to their small volume, many systems are run above 85% utilization which degrades the performance.

Many systems also run beyond their original maintenance contract, which causes issues in sourcing parts to make repairs; older systems (>5yr) increase the risk for catastrophic data loss. Some systems were purchased by PIs without a provision for backup systems, which has led to confusion of which data shares should have backups. Our prior backup methodology does not scale to these larger systems with hundreds of millions of files. Given these historical reasons, revamping our storage service offerings allows FASRC to maintain the lifecycle of equipment, allowing us to project the overall growth for data capacity, datacenter space, and professional staffing to maintain your research data assets safely.

How does the Storage Service Center benefit me?

Prior to the establishment of a Storage Service Center, we only offered a single NFS filesystem for your Lab Share; you now have the choice of four storage offerings to meet your technology needs. The tiers of service clearly define what type of backup your data will have. You only have to pay for an allocation capacity that you need, as opposed to having to guess at the beginning of a server purchase and have this excess go unused.

Over time, you can request an increase to your allocation size. You will receive monthly reports on utilization from each tier to help you plan for future data needs. Some of our tiers will also have web-based data management tools that allow you to query different aspects of your data, tag your data, and see visual representations of your data.

Is storage not covered in Harvard F&A rate?

Unlike the compute cluster, where resources are reserved and released, data is allocated to storage long-term. In addition, storage needs across various research domains is drastically different. Therefore, in the FY19 federal rate setting, FAS decided to remove the portion of FASRC dedicated to maintaining storage out of the facilities part of the F&A. This allows FAS to run a Storage Service Center with costs that are allowable on federal awards.

How do I request a storage allocation?

Information about the storage offerings can be found on our Storage Services page and Storage Service Center document . Requests for storage allocations can be made through our portal. We ask that you limit your requests to once a month at most. We have a cutoff date of 15th for billing. Please keep in mind that large requests (>100 TB) might not all be available at the time of request and a smaller increase will be applied as we add more capacity in the coming month.

Can I have storage allocations in different tiers?

Yes, you can allocations in different storage tiers to meet your needs and budget.

How do I allocate costs to my grants?

Per use allocation method: You will be supplied a usage report by the user for each tier. You can use the % of data associated with this individual as the cost and use the same cost distribution of their % effort on grants.

This method allows faculty to manage their data structures independently to the specific projects as multiple projects will be using some of the same data. Keep in mind that as researchers leave, there needs to be a plan for their data as this data will continue to be reported on in the usage reports.

Per project allocation method: If requested a project specific report, you will have a direct mapping of data used by this project and can allocate this full cost to the cost distribution from grants.

This allows there to be a very straightforward assignment between data and funding source. Reuse of the active parts of this data will need to be assigned to future projects.

Example 3: The above PI also has 100 TB allocation on Tier 0 used for multiple projects with multiple funding sources. The usage report for the Tier 0 would be provided per user as per Example 1 above, and the % effort allocation method would be used for Tier 0, while the Example 2 would be used for the new project on Tier 1.

As is common with other Science Operations Core Facilities, once funding sources have been established for bills, we will continue to direct bill those funds until the PI updates these distributions. For the first few months billing will be manual via email until the new Science Operations LIMS billing system is complete.

What happens to my data after my grant ends?

We suggest that a data management plan is established at the beginning of a project, so that a full data lifecycle can be mapped to phases of your data. This helps identify data that will need to be kept long-term from the start, as well as helps mitigate data being orphaned when students and postdocs move on. If research data is being used again in a subsequent project, you should allocate funds to carry this data forward to new projects. As per federal regulations, you cannot pay for storage in advance. The Tier 3 tape service provides a location to deposit data longer term (7 years) which can meet many of the funding requirements,

How will I be billed?

Billing will be handled by Science Operation Core Facilities. You will be billed monthly for the TB allocation of space for each tier. Groups will have 2-3 business days to review the invoices before the charges are assessed via internal billing journals. By default, we will also provide you a usage report by user. A usage report per project can be available by request and is best setup for new projects with new allocations.

What is my responsibility regarding billing?

It is your and your finance admin's responsibility to update or verify your 33-digit billing code for monthly billing in the FIINE system. If no other billing codes are designated, your start-up fund will be used. We are here to help you navigate these decisions: Contact FASRC

What should I do if I have a billing question or need to change tiers?

Can I still purchase a storage server and FASRC manage it?

We have moved away from owned servers. Very few exceptions will be made. If circumstances warrant one, the request will be reviewed by the University Research Computing Officer, Sr. Director of Science Operations and Administrative Dean of Science. One possible exception is when storage must be adjacent to an instrument where data collection rates are beyond the capacity of 1 Gbps Ethernet (100 MB/s) for extended periods (days).

What happens to my existing storage server?

We will maintain existing physical servers while under warranty, which is typically 5-6 years from their purchase date. We will need a data migration plan to the appropriate tiers a few months prior to decommissioning the server.

Over FY22 we will be migrating whole filesystems at a time into the storage service center. All new space requests will be allocated on newly deployed storage in one of the Tiers.

Most owned storage servers have already been phased out.